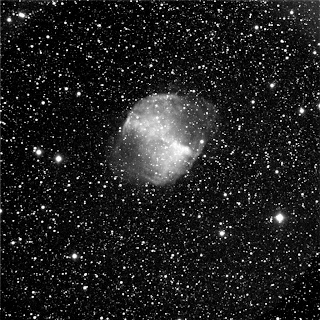 Image of the planetary nebula M27 Dumbbell in Vulpecula.


Despite the nearly full Moon and some high thin cirrus clouds I captured this composition of six images of 30 seconds then stacked, La Cañada J87 2007.09.22.

Stars with mass above Chandrasekhar limit (1.4 Solar masses) burn nuclear fuel (hydrogen then helium) quite fast, when exhausted the radiation pressure is no longer able to support the weight of the outer layers of the star, which was so far in hydrostatic equilibrium. The usual end is an implosion of the external shells, still with hydrogen, raising the core temperatures and starting suddenly explosive nuclear reactions. The result is visible many times as a Supernova. Later on the gas and metal debris ejected into the galaxy's neighbourhoods shine as a planetary nebula. In the geometrical center of the cloud it is sometimes visible the remmanents of the progenitor star.
Publicado por Juan Lacruz en 8:21 PM No comments:

Discovery of a Jupiter Trojan asteroid

The animation below shows the simulated orbits of Jupiter Trojans (green color) and Hildas (red) courtesy of Petr Scheirich. 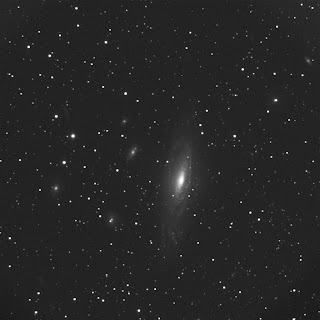 Fine spiral galaxy in the constellation of Pegasus.
This image from La Cañada on 2007 Sept the 14th has been composed adding 6 frames 30 seconds each. LX200R 16" F10 + STL 1001E. The field of view is about 21 arc min.
The faintest stars shown are about 20V magnitude.
Some other five galaxies are visible. North is up, east is left.
Publicado por Juan Lacruz en 5:16 PM 2 comments: 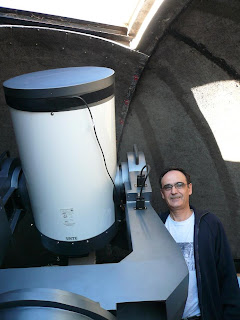 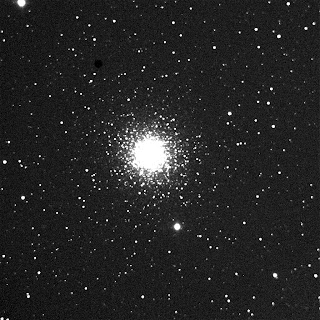 
Globular clusters are groups of about 100.000 stars gravitationally linked into a compact spheric configuration. These clusters, located in the halo of most galaxies, orbit the nucleus not just in the principal galaxy plane but at any angle. They were formed at the time the galaxy was born, their stars are population II (the oldest observed in the galaxy). Most of them, which have very low metallicity , are in late states of evolution giving a characteristic red color to the cluster.
Publicado por Juan Lacruz en 12:38 AM No comments: