On Aug. 27 R. E. Hill with the Catalina Sky Survey 0.68-m Schmidt found this diffuse comet with no clear condensation and a 12"-15" coma with a broad, diffuse tail about 20" long in p.a. 250 deg. The object was then included in the neo confirmation page (NEOCP) for other observatories to confirm and follow up. 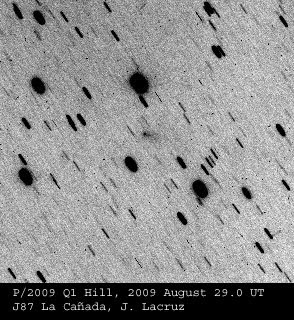 This (above) is a cropped non-zoomed stack composition of 29 images of 2 minutes each taken with the .40m Ritchey-Chretien F10 + CCD at La Cañada, the North is up and the East left. 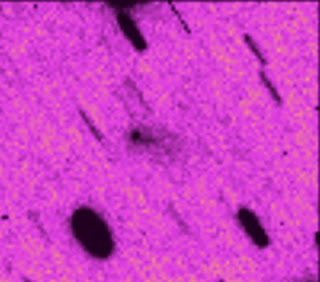 This Jupiter family comet has a period about 13 years.

The night of August the 22nd I was trying to recover the asteroid K01QS8G, it is interesting because from a dynamical point of view it could be taken for a comet and it was not observed since its discovery back in 2001.
The object was there, some arc minutes off the nominal position, with the predicted magnitude, speed and direction.
In the same field another, non catalogued, object was also moving. I reported the K01QS8G observations to the mpc and kept the unided object to try and get a second night on the 23th.
You wont usually get discovery rigths unless you observe the body on two different nights.
The next night I pointed the telescope to the position where it was supposed to be and found it close to the ephemerides, to my surprise another object was moving over there.
Because it was moving at a similar speed and direction, I thought it could well be present on the same images from the night before, I prepared backward ephemerides for the new object, re-stacked the images and luckily enough it was there, then I reported booth.
The mpc, very soon, assigned new designations: 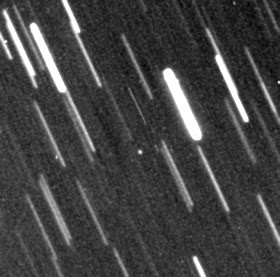 I was trying to confirm this object found by the OAM J75 observatory La Sagra from the NEOCP on the night of August the 2nd in a very good night with low seeing, probably due to the uncertainty in the preliminary ephemerides available on-line from the mpc the stacked images showed a slightly diffuse object. However it resulted to be purely asteroidal, the lesson learned is that a lot of care should be taken when trying to find cometary activity by stacking frames on the movement of an object with an orbit not well known yet.
Publicado por Juan Lacruz en 5:01 PM