On 2010 July 18.03 working in remote from Madrid, I've confirmed this recently discovered object which was posted on the NEOCP with the observatory designation RO4B8DB, very low in the sky, at only 15 degrees of elevation an moving fast, at nearly 4 arc seconds per minute, this wouldn't seem an easy target if not for the relative brightness about 17 V, some sixty images of 20 seconds each arranged in three stacks of twenty resulted enough to perform astrometry with good signal to noise ratios and low residuals about 0.5 arc seconds. 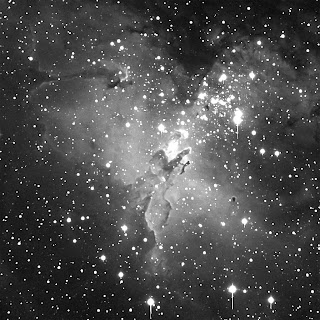 Fairly noisy single 5 minutes frame taken at 28 C.
Since the camera doesn't have anti-blooming gates, some stars saturate the pixels and the electrons in excess spill over to create the vertical bars seen in the brightest stars.
Anti blooming gates are not desirable when the aim is to produce quality photometry, saturated stars become readily apparent and shouldn't be used for the photometric solution.
Publicado por Juan Lacruz en 12:16 AM

Email ThisBlogThis!Share to TwitterShare to FacebookShare to Pinterest
Etiquetas: M16 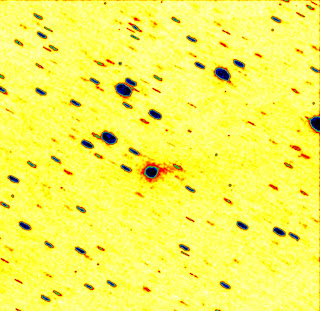 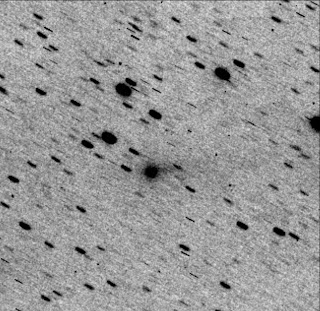 Email ThisBlogThis!Share to TwitterShare to FacebookShare to Pinterest
Etiquetas: P/2010 A5 (LINEAR)

An object posted on MPCs NEOCP was confirmed on a stack of images taken remotely from Madrid on 2010 July 04. Moving at 6 arc seconds per minute at magnitud 19V didn't seem an easy object however the night was clear enough to allow an early detection with small residuals. Because the resulting plate scale of the telescope + CCD system is about 1.2 arc seconds per pixel, the exposure used was 10 seconds per frame, short enough to prevent the asteroid drift.

This case highlights the different classification scheme used by different organitazions. Having a semimajor axis a = 1.533 and perihelion distance q = 1.005, 2010 NG is Amor for the MPC and Apollo for the JPL.

Atens have semimajor axes, a, less than 1 AU;

Apollos have semimajor axes, a, greater than 1 AU, and perihelion distances, q, less than 1 AU;

Amors have perihelion distances between 1 and 1.3 AU.